Through studying Politics & Law I had the opportunity to become the Youth Member for Warnbro at this year’s YMCA Youth Parliament. In this program we were able to write bills and debate them in Parliament. We were split into various committees, as part of the Government or Opposition, which covered a wide variety of topics, including Police & Justice, Education, Environment, Mental Health, Youth Affairs, Multi-cultural Interests, Child Protection and Commerce. I was part of the Commerce Committee, which was an Opposition committee, and became the Shadow Minister for Commerce (it was my job to introduce the bill to the House and I had more time to speak on the bill than other members). Whilst on camp, it really felt like we were actual Members of Parliament. We had caucus meetings each night before Parliament, in which we discussed how we would attack the bills presented by the Government and how we would support the bills we would present. We also went through all the processes of Parliament, including question time, which was really fun. When it came time to vote for a bill everyone was able to make a conscience vote, rather then having to vote according to our party ideology.

The Commerce bill, which I introduced, outlined a mentorship program for people wanting to start up a small business. This would see successful small business owners’ act as a mentor towards those who have a good idea for a small business, but are struggling to put their idea into action. We also suggested a revamp of the small businesses website to make information about grants and incentives easier to find. Our bill passed with all the proposed amendments; 37 ayes to 14 noes. 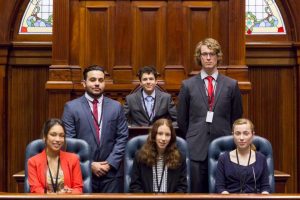 Apart from the passing a bills, we partook in a debate regarding a Matter of Public Interest, the issue this year was “Australians deserve the right to choose their fate – we should decriminalise euthanasia”. We also held an Adjournment Debate where every member got to talk about any issue that they felt passionate about. Overall, we sat in Parliament for three days and debated eight bills. It was really fun and a great experience, especially because we got the opportunity to sit in the Legislative Assembly of the Western Australian Parliament House. It was great to learn about Parliamentary Procedures by actually doing it rather than just reading about it. It was a great confidence booster and it really helped improve my public speaking skills. I also met so many friendly, like-minded people at YP who have become good friends.

I will definitely be applying again next year, and I recommend this program to anyone interested in politics because it is such a great experience and you learn so much. For more information about the program, visit www.youthparlwa.com