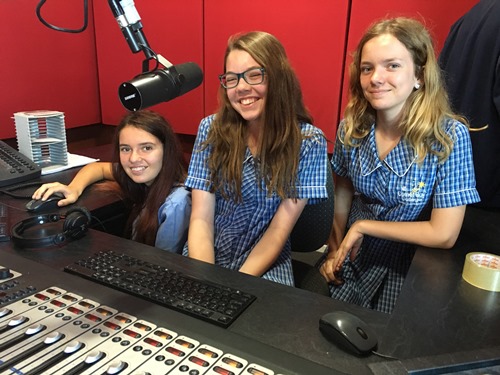 On Friday, 11 December 2015, several students involved with the Comet Bay College Radio Program participated in an excursion to ABC Studios Perth and RTRfm, Mount Lawley. Through visiting these stations, students were able to experience how radio is produced, including the broadcast of news bulletins, brand identity and music selection.

We began our trip with a visit to ABC Studios. The national broadcaster houses facilities for radio, TV, and film and we got to see everything thanks to Sarah Knight, the local manager. Starting in the radio broadcast room, we saw the producers hard at work behind the scenes, the presenter talking into the microphone in the adjacent soundproof booth. Students were able to see the high-pressure and fast pace at which a broadcast room operates, with producers having hurried phone conversations while surfing the net and watching TV. All the while they engaged our students and answered their questions.

We also got to explore the studios’ various production rooms, control rooms and the immense sound stage. A favourite amongst students were the “TARDIS booths”, which are used to provide quiet spaces for interviewees. Finally, our visit wrapped up with a tour of the drama room, a place the students loved, as it featured various props used to create sound effects for radio plays.

We bid farewell to Sarah and after a break for lunch, headed to Mount Lawley to see local community radio station, RTRfm. Chris Wheeldon, Operations Manager, showed us to the boardroom and gave us a rundown of the history of the station, and the volunteers who make it work. It was fascinating to see the differences between a national broadcaster and a local radio station, and our radio students were keen to learn about volunteering opportunities. After having a peek at their comprehensive music library, we had a tour of the sound booths where volunteer presenters broadcast their segments.

The excursion was a fantastic opportunity for our CBC Radio team to learn more about the industry and see how radio operates at both a national and community level. Year 10 student, Harry Bell, noted that he “felt incredibly privileged to be

able to tour the ABC studio” while fellow Year 10 John Fegebank said that working at RTRfm would “feel like a second home.”