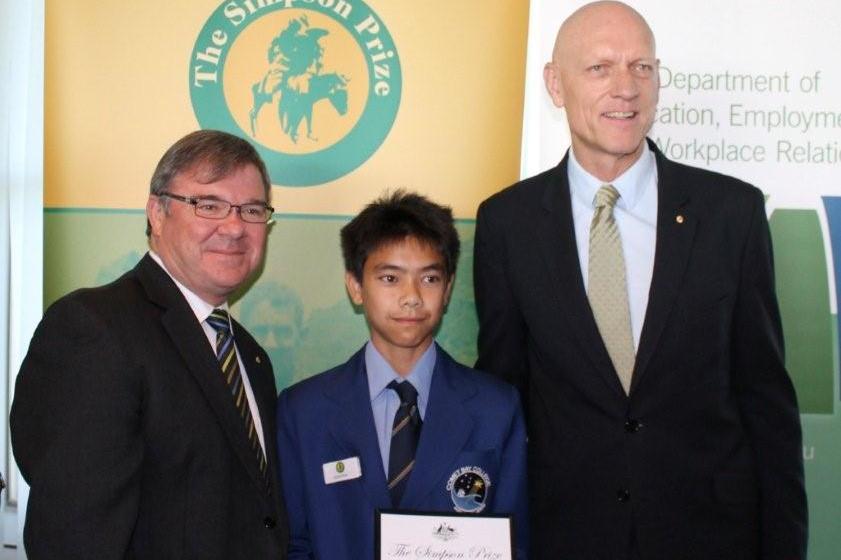 Comet Bay College Year 10 student Charlie Rees was today congratulated for his outstanding effort as a runner-up for the 2013 Simpson Prize, a history competition for students in Years 9 and 10 about the ANZAC tradition.

“Over 1,000 students from 122 schools took part in this year’s prize, so to have a runner up from our local region is fantastic,” local member of Federal Parliament Gary Gray said.

“As the state runner-up, Charlie is getting a two-day program in Canberra which includes visits to Parliament House, the Australian War Memorial and the National Museum of Australia.”

This year students were asked to investigate what primary sources reveal about the Gallipoli experience and explore the extent to which they explain the origins of the ANZAC Legend.

Charlie (15) said he was surprised and excited to win the tour of Canberra, including the presentation today of a certificate and medal by the Minister for School Education, Peter Garrett.

“Gallipoli and ANZAC are a significant part of our history and were fundamental in forming the Australian identity,” Mr Gray said.

“This is one of the reasons why young Australians will learn about ANZAC history and other important events as part of the new Australian Curriculum.”

“This is a fantastic program that encourages students to engage with our national history and I look forward to learning about Charlie’s experience in Canberra.”