The Eagles Cup is the most participated school sporting competition in Western Australia, including Private, Independent and Government Schools ranging from remote locations to the metropolitan area. It cannot be underestimated how extremely difficult it is to win such an event once, let alone 3 successive times! It is something we as a whole school community can be extremely proud of – our boys represented the College all so well with an inspirational display of discipline, desperation, perseverance and humility in victory. All have had a hand in the win with the continued community interest, demonstrated pride among students and unwavering support of staff and families. The boys involved have worked diligently and trained hard for this win and congratulations are well beyond deserved. Special mentions go to Deon Welhan who was awarded the Ross Davis Medal for being the Best Player of the 2016 Season and to Kyle Peachy who was awarded Best on Ground for the game.

Significantly, each of these three State Title wins have been with different groups of students. Program Coordinator Stephen Thomson says “In our 10th year of the program I am thrilled that we are clearly in a situation, where though our playing personnel change as students progress through the year levels, the exceptional results continue to be produced. It demonstrates our program, culture and system is a very good one,  and our staffed by very skilled, committed and dedicated people.” 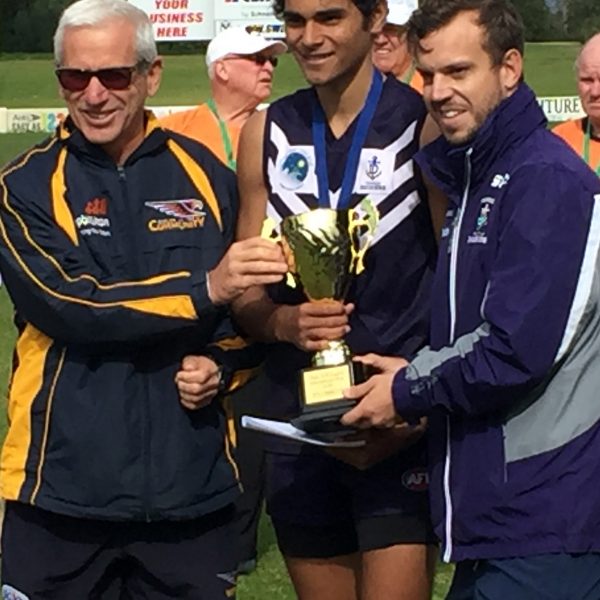 “I would like to publicly acknowledge the effort and sincerely thank Nic Chidgzey, our coach of the 8 / 9 team and his Assistant Ben Jahn who have endured the 7pm arrivals home from work twice a week since late term 1 until today working with our teams – as always the rewards are in the development of the boys involved in the AFSP but these wins are always very special. Also to Chris Harry and Sam Mainwaring who have both come on board for 2016 and have also donated so much of their out-of-school time for our kids.” – Stephen Thomson Program Coordinator